Mirissa was definitely one of the top places in Sri Lanka I visited in my four-week trip. From having one of the best beaches in Sri Lanka with an epic wave for bodyboarding to the delicious food on offer everywhere. It’s definitely an awesome spot to take a few days and just chill right out! It’s quieter and less hustle and bustle than Unawatuna but still has a few spots to get a great coffee and some avo on toast. So if you’re heading to Sri Lanka’s favourite beach destination, here are all the things to do in Mirissa while you’re there. Stock up on that sunscreen kids!

1. Hit Up The Beautiful Beach

One of the best things to do in Mirissa Beach Sri Lanka, unsurprisingly, is hit the beach!Mirissa beach is definitely one of the most beautiful beaches in Sri Lanka. It’s palm tree-lined with white sand, turquoise water and the perfect amount of waves. I’m not a huge fan of the pounding waves you sometimes get on the surf coast of Australia and this wave was just right for me. And just right to do a ‘lil bodyboarding. I’d recommend heading to Mirissa beach Sri Lanka pretty early and parking yourself in a shady spot under a palm tree. The beach can get a little busy from 11 am. And it seems to be full of people who don’t understand that if your beach towel is touching mine you’re too close… Amiright guys!? Anywhoo a few peaceful early hours at the beach is all you need. Then you can spend the afternoon reading in a hammock somewhere.

2. Eat Some Of The Best Food In Sri Lanka

One of the top things to do in Mirissa is eating this amazing smoothie bowl from Shady Lane.One of the very best things to do in Mirissa Sri Lanka is eat! And as we spent almost a week in this paradise I had a pleasure of trying almost all of the best restaurants in Mirissa. My absolute faves were; Shady Lane for the perfect Australian style brekki of avo on toast with poached eggs and other toppers, and their delish smoothie bowls; Margherita Italiano for their next-level pastas and amazing service; Little Tuna Sushi for the freshest sushi in town; No 1 Dewmini Roti Shop to try drool-worthy homemade Sri Lankan food (please note, if you want curry you need to order a day in advance); And Barista Cafe for the best coffee on the island. I’m talking perfectly foamed lattes guys! Do yourself a favour and try any of the above best restaurants in Mirissa Sri Lanka. You won’t be disappointed!

3. Snap A Pic In A Palm Tree Forest

One of the best places to visit in Mirissa is this incredible palm tree forest.One of the best places to visit in Mirissa is the secret palm tree forest just past Mirissa Beach. To get there you can either walk along the busy Matara Road until you see the sign for The Sea Star Hotel. Turn right and there is a little path that will lead you to the forest. Alternatively just walk along the beach from Mirissa Beach away from Colombo. you’ll pass through about three bays and then you’ll have to climb up a steep rocky path to the top of the forest. From here you can also sit and watch the surfers if you’re there around sunrise or sunset.

Climbing Parrot Rock is one of my favourite things to do in Mirissa Sri Lanka.Another one of the top things to do in Mirissa Sri Lanka is to climb to the top of Parrot Rock. Now when I say climb I’m probably over exaggerating. Parrot Rock is the little mound you can see overlooking Mirissa Beach. There’s a sign that says private property, but we were told by locals we could just ignore that. It’s a really nice thing to either do around sunrise or sunset to watch the activity starting or wrapping up on the beach.

One of my fave money saving tips when travelling, especially to a beach destination, is packing your own snorkel. And one of the top Mirissa activities is snorkelling in Turtle Bay. Turtle Bay is one bay over from Mirissa beach and is really only swimmable in low tide as the ocean completely swallows the sand at high tide. If you head here early in the morning you might be lucky enough to snorkel with some of the local turtles. Fingers crossed Turtle Bay lives up to its name for you!

6. Try And Spot Some Whales

One of the top things to do in Mirissa is whale watching. In fact, Sri Lanka is one of the only places in the world where you catch a glimpse of a blue whale. The Mirissa Whale watching season runs from November to April and then July to September. But the best chance of sighting anything is from December to March as the ocean isn’t as rough. I read up a lot before whale watching in Sri Lanka and in particular Mirissa whale watching as there were many negative reviews out there. People were describing the trips as terrible with people having awful bouts of seasickness and the boats literally just chasing the whales around the ocean and getting too close.

There were so many negative reviews we actually considered skipping it. Finally, I found a company (Whale Watching with Geeth) that had really good reviews and we decided to risk it. I’m really glad we did as Whale Watching with Geeth was excellent. The staff were friendly and caring and Geeth (our captain) hung back and didn’t go too close to the whales. We saw one Blue Whale, some turtles mating and a couple of whale sharks. It was a really nice way to spend a morning. If you’re wondering what to do in Mirissa Sri Lanka, definitely add whale watching to your list.

QUICK FACTS: COST: The average Mirissa whale watching price is around $65 USD. You may be able to find cheaper, but I’d just make sure it’s a reputable company  | TIME NEEDED: half-day (6 am – 12 pm)

7. Cocktails On The Beach

There are a tonne of Mirissa beach bars lining the sand on this little strip. And you can’t really visit Mirissa without hitting at least one of two of them up. Most of them do happy hours with daiquiris starting at about $3 USD. We checked out Kama, which is quite popular but a little pretentious and Zephyr, which didn’t have a happy hour, but the cocktails were delicious. So, if you’re looking for the best things to do in Mirissa beach, add a night of cocktails to your list!

Where To Stay In Mirissa

If you’re looking for places to stay in Mirissa, you’ve come to the right place. There are a number of awesome hostels and hotels in Mirissa Sri Lanka, so whatever your budget I’ve got an option for you. 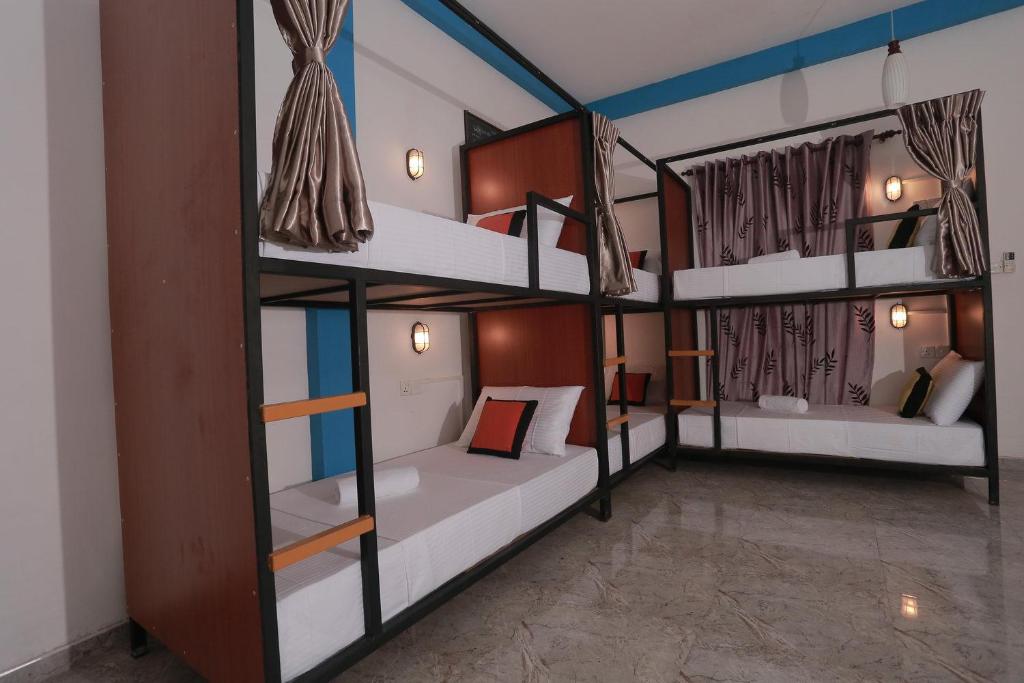 Affordable hostel a 2-minute walk from Mirissa beach with a cafe on premises. 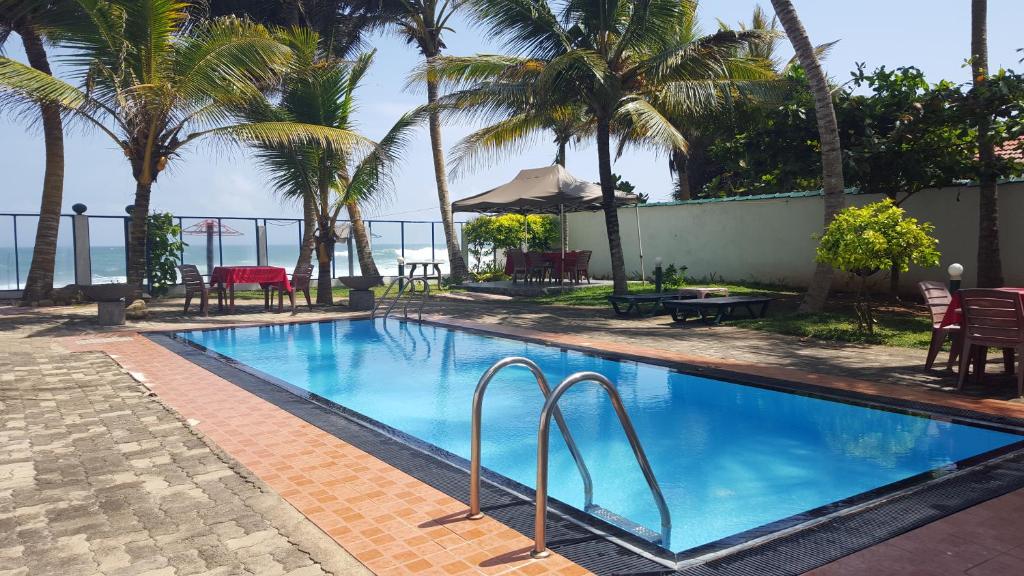 This peaceful, budget hotel is a little further out of town but has a private pool and is beach fronted. 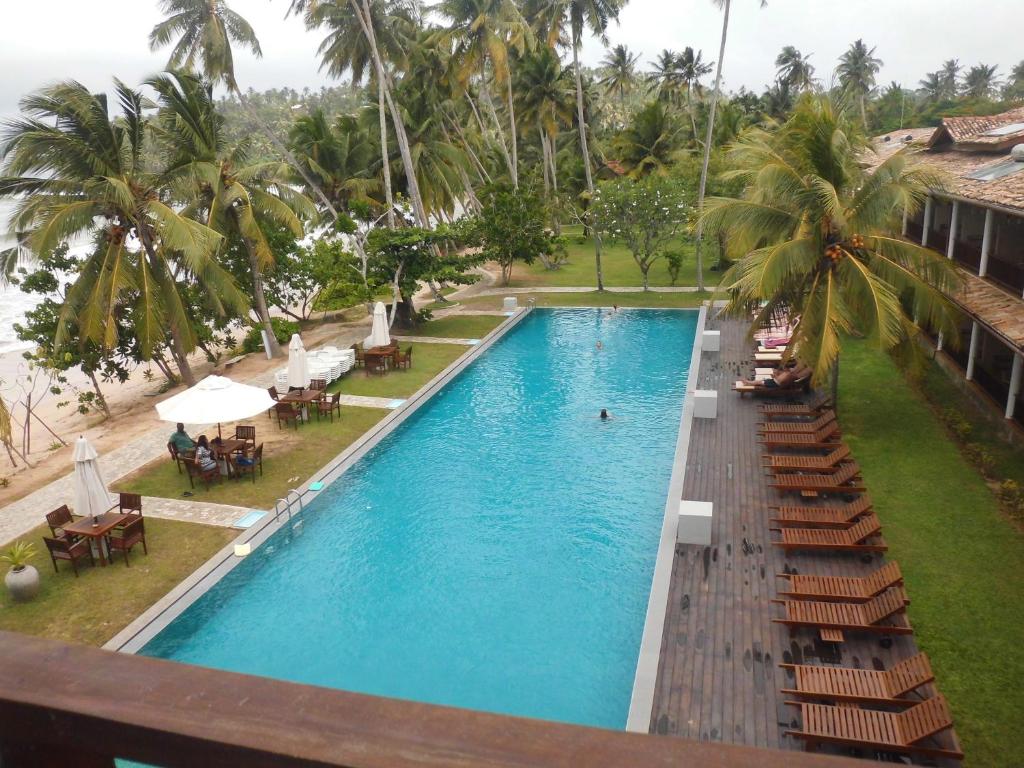 Arguably has the best location in Mirissa beach. Right on the main beach with private pool.

Luxury Mirissa accommodation further from the beach, with stunning rooms and pool.

Mirissa is definitely more expensive than most other locations in Sri Lanka. This is because it’s definitely more touristy. We managed to spend around $50 USD per person, per day. This included accommodation at Edelweiss Resort. Breakfast and dinner out and a homemade snack for lunch. As well as whale watching and a few cocktails. If you stayed in a hostel and cooked your own meals you could do all the things to do in Mirissa Beach Sri Lanka for much cheaper.

How To Get To Mirissa

There are two ways to get to Mirissa on a budget. This is assuming you are heading there from Colombo. The first is by bus. Take the bus from the Colombo Fort going to either Matara or Tangalle and ask the driver to let you out at Mirissa. The bus takes about 4 – 5 hours and will cost 370 rupees for airconditioning. The 2nd way is by train. Take the train from Colombo Fort to Weligama (7 km from Mirissa). Then you can either catch a bus (around 50 rupee) or tuk-tuk (around 700 rupees).

The quickest and easiest way to get from Colombo to Mirissa is by private car. This will take about 4 hours and set you back around 10,000 rupees (Around $65 USD)

All Over The Things To Do In Mirissa And Want More Of Sri Lanka?

Everything You Need to Know Before Hiking The World’s End

The 7 Best Things To Do In Unawatuna

There are links within this post on the best things to do in Mirissa Sri Lanka that I can earn a commission on, which allows me to keep providing free travel tips and destination guides. If you’re thinking about purchasing something I have recommended I’d really appreciate it if you bought it through this site. All opinions as always remain my own.